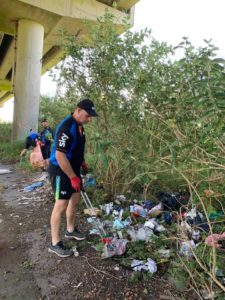 Briton Ferry Town Council arranged a litter pick in an area which is plagued by fly tipping,  near the Quays, Briton Ferry under the M4 bridge. Five SKY TV engineers kindly offered to help on a volunteer day which  SKY TV  give their employees. They were Steven Williams,  Jon Thomas Rees,  Craig Griffiths,  Ian Hughes,  Huw Jenkins and their Manager Chris Conway accompanied them.

Barry Cosker, Sylvia John, Cllr Hugh James and Vivienne Jones from the Town Council were joined by David Channon, Linda Soczewko  and Roderick Hughes. Sian Williams, who kindly arranged all the equipment needed and sanitiser, joined the team to clear the area.

This was a mammoth task and the rubbish cleared from the area was unbelievable and has made a massive difference.

Neath Port Talbot Council Employees arrived and took several loads of rubbish away during the litter pick and they were equally important to the task. Thank you!

The Town Council would like to say a massive Thank You to all who offered their time and worked so hard.

The message here is  everyone can Get Involved in Keeping Briton Ferry Tidy by word of mouth, reporting any fly tipping  and educating everyone to respect our environment and ensure it is maintained for future generations to come and all wildlife. Future litter picks will be arranged after Lockdown and  will be included in the Events on this site.

Pictures taken during the litter pick are included below. Litter picking can be included as exercise during the COVID19 Lockdown and social distancing was adhered to.