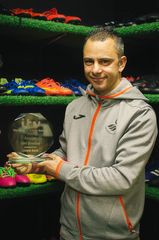 A massive well done to Carl Bradley of the Boot Room who has put Briton Ferry on the map for the right reasons and has been recognised countrywide for his work. Michael Sheen surprised Carl with a trophy for his efforts ensuring young people have access to sporting equipment on The One Show earlier this year.

I’ve known Carl Bradley for over 15 years through his charity work. Our paths always seemed to cross because we care about similar issues. In 2019 he asked to talk with me about an idea he had to create an initiative to enable children from disadvantaged backgrounds to stay in sport. He wanted people to donate their old, clean kit and boots. They would then be donated to another child. This was a light bulb moment for me. 1 in 3 children in Wales live in poverty. So much clothing is thrown away each year. Repurposing in this way would not only transform lives but help our environment too. I was keen to get involved and support in any way I could. Our radio stations agreed to be a drop-off point for kit and boots. This was long before the initiative made Vernon Place Community Hub in Briton Ferry its home. Carl came along to its official opening because I had been asked to cut the ribbon due to my work with the team at the Old Llansawel Primary. That is when Carl revealed he had gone to school there. That day led to Carl connecting with Tracey and the team and deciding to make it the main drop-off and collection point. Two years on and the project has helped thousands of children. Breaking down the barriers that have previously stopped young people doing what they love. Poverty should not halt someone’s potential to succeed in football or rugby. This initiative inspires me every day. A group of volunteers who understand the importance of physical exercise not just for a young person’s physical health but mental wellbeing too. Carl saw the potential to help others not just in Wales but UK-wide. He is encouraging communities in every region to join The Boot Room family. Throughout the pandemic The Boot Room has stepped up time and time again. It was nominated for Pride of Britain and won an FAW Trust award. Swansea City Football Club are huge supporters they are the main partner and sponsor of the initiative All I can say is watch this space, there is much more to come from this incredible project. 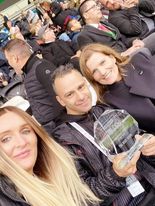 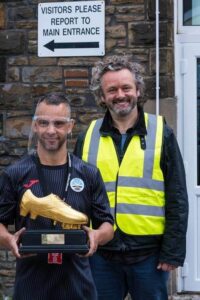 Follow the links below to find out more about Carl’s amazing story.