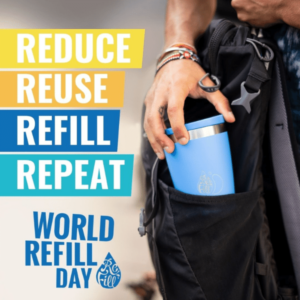 This World Refill Day, choose to reuse and join millions of people around the world taking action to reduce plastic pollution.

World Refill Day is a global public awareness campaign to prevent plastic pollution and help people live with less waste.  Together with our planet-protecting partners, and thousands of everyday activists around the world, we’re calling on businesses, brands and governments to choose to reuse and help make single-use plastic a thing of the past.

As a global movement, we have the power to create a wave of change. By choosing to reuse, we’re saving millions of pieces of plastic and sending a message to the rest of the world that the solutions to plastic pollution and the climate crisis are there – and together we can keep our environment, oceans, cities and communities plastic-free for the future.

Our vision is a world where everyone can choose to reuse wherever they eat, drink and shop.

From a coffee on your commute, to drinking water on the go, or even shopping with less packaging, Refill puts the power to reduce plastic at your fingertips.

Anyone can download the free Refill app to tap into a global network of places to reduce, reuse and refill.  With more than 30,000 places offering free drinking water globally, over 300,000 app downloads and 100 million pieces of plastic avoided to date, we’ve proven that Refill has the power to create a wave of change and stop plastic pollution at source.

Every year around the world we create more than 300 million tonnes of plastic – and half of this is single-use use. One of the worst offenders are plastic bottles, with a million of them sold every minute around the world–a figure that’s expected to grow by 20% by 2021.

Here in the UK, not only does our ‘lunch on the go’ habit generate 11 billion items of packaging waste a year, but we get through a whopping 2.5 billion coffee cups each year –enough to stretch around the world roughly five and a half times!

The Refill campaign has already prevented over 100 million pieces of plastic at source so we know we have the power to create a wave of change. By connecting people to places they can shop, eat and drink without the pointless packaging, we’re helping prevent plastic pollution and making ‘reduce, reuse, refill and repeat’ the new social norm.

In the UK, we’re lucky to have some of the highest quality drinking water in the world. Shockingly, a recent global study of bottled water brands found tiny plastic particles (microplastics) in over 90 per cent of samples. That’s enough to make anyone reach for their reusable bottle and start refilling!